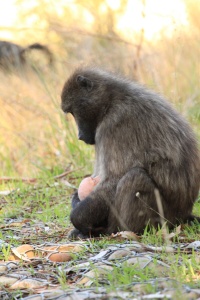 Is that a human or a monkey she has in her hands?

They called her ‘Bleskop’ at first. ‘Bald head’ in Afrikaans. We renamed her Dobby. I think she likes her new name.

I’ve fallen in love with a monkey. Yup, there it is. She’s a month-old Chacma baboon. And I honestly have to say I’m totally in love with her! If it weren’t completely unethical (and if her mom wasn’t such an awesome mom to her), I’d smuggle her home under my shirt and raise her myself. And I was really tempted on quite a few occasions when her hair loss got really bad. Yes, she is also a balding baby baboon.

Apparently baboons can suffer from alopecia, just like humans, and the condition has been documented before in captive baboons. However, the only other time I’ve seen any record of a bald baboon outside of captivity is a female that lives in Kariba in Zimbabwe. And in yet another example of how similar these fellow primates can be to homo sapiens, she was shunned by the rest of the troop because of her looks. Admittedly, she is one of the scariest looking things I’ve ever seen, and I imagine she could be the basis of a few nightmares if you came across her in the bush. If you’ve never seen a photo of one, and you most likely haven’t, check out this link and you’ll understand why I was more than a little concerned about Dobby’s thinning hair (note – images are a bit haunting, so don’t say I didn’t warn you): http://www.dailymail.co.uk/news/article-2271173/Hairless-female-baboon-spotted-bush-rejected-troop.html

I met Dobby when she was less than a week old, and she was already going bald. In fact, she was born monk-style, with a pale pate of skin on the top of her round little head glowing like a pasty Englishman on a Brazilian beach. If her mom held her just right, she looked like a human child.

As the days went on, she lost more and more hair, going from monk to overly hairy gnome in only two weeks’ time. No one could figure out why. She had no signs of mange or infection, and she appeared totally healthy otherwise. In fact, she was a spright little pixie, aware of everything going on around her and keenly interested in what the troop was up to while she stayed cuddled in mom’s embrace.

Now, I know many people don’t like baboons. Perhaps they’d look at her and think she wouldn’t last one of these cold, wet winters, and be happy about it. One less baboon, right? I am not one of those people. I love these critters. And I love her most of all. In fact, I was keenly concerned that she would die of exposure, no matter how caring and attentive her mom was, simply because without hair to keep her warm on these VERY cold winter nights, she was fighting a serious uphill battle. And points to mom, by the way, for being so incredibly attentive to her little peanut! As moms go, Dobby’s mom is pretty high up there in the offspring-rearing category.

We contemplated knitting Dobby a beanie and a sweater, but then realised baboons being baboons, her wardrobe would get pulled off of her by the other curious members of her extended family, and we’d be back to a bald baby baboon. Plus we thought she might get injured in the ambush if some of the juvenile baboons got too excited in the rush to play with the new alien items. So that idea got trashed. We also got worried when we saw some red cuts on her head from being over-groomed, but those healed as well.

Every day I couldn’t spend with her, I asked my boyfriend how she was, and every day I had a little knot in my stomach in anticipation of him telling me she’d died in the night, my frozen little missing link. But every day he reported back that she was fine, starting to play with the other young baboons and finally beginning to venture out of mom’s immediate reach.

In the last month and a half, Dobby’s become quite the little climber, summiting mom’s head and attempting to conquer some saplings. Her motor skills are still in development, but she’s right where she should be at her age, albeit a bit less hairy. She’s been abducted a few times by other baboons in the troop, but mom’s managed to rescue her without incident. The first time she ventured off on her own, another youngster grabbed her by the arm and dragged her back to mom’s safe keeping. She even got dragged around on her head for a bit when a juvenile wanted to play with her and stole her away. A few little squeaks and honks later and mom had her girl back by her side. In fact, it appears the whole troop wants a piece of the little bald wonder. They all come up to visit her, pulling at her arms and legs, tugging on her tail, lip-smacking stories to her. It seems everyone is in love with Dobby.

I was excited to hear that a week ago she started growing very fine black hairs on her head. Slowly but surely, she seems to be sprouting some insulation on her pip. I breathed a sigh of relief, no joke. I was happy to know she would have that extra necessary layer to keep her toasty during the miserable winter rains that drench this area from May through November.

It’s funny how attached you can become to something that is not only not yours, but something completely wild. I have no stake in this animal’s future or well-being (and to be honest, without breaking the law, there’s really not much I can do for her anyway), and yet I feel compelled to know her story. I feel compelled to spend hours sitting with her and her troop, watching her grow up. I hope you guys enjoy hearing about her escapades as much as I enjoy being a part of them. I’ll be sure to share more as she grows up. Dobby, the wonder baboon.

As an aside, yes, for anyone who doesn’t believe it can get cold in Africa, it does. I’ll admit, when I came here, I was shocked at this revelation. I had this perception that the entire continent of Africa consisted of varying degrees of sauna as far as temperature goes. Of course, logically, when you’re the last country on a continent before Antarctica, it would make sense that it gets a bit chilly at some point. And it does. We had a two-day hail storm here two weeks ago (after which I was convinced Dobby had probably kicked it). The surrounding mountains already have snow. You can probably imagine it’s pretty rough on the wildlife. It’s also the reason I’m convinced baboons here are the fluffiest I’ve ever seen. Well, except Dobby. For now, at least…

Song(s) of the day – Don’t Give Up, by Peter Gabriel; Titanium, by Sia

By the way, if you have any songs you recommend, feel free to let me know. Would love to hear what comes to your mind when you read these posts.

And without further ado, the little fighter…..

Dobby and mom sitting in a tree

Relaxing on a branch

the little Elizabethan with her ruff in place

The little bleskop and mom in the field

look at this bod!

Dobby with her new ‘do

South African Adventure #100 – The Rise of the Cheetah Chick

Posted on August 20, 2012 by buzzfromthebush

Soooo it looks like I’ll be hanging up my camp boots and strapping on my rehabilitation scrubs – I’m trading the savannah for the fynbos and the karoo, saying ‘sayonara’ to students and ‘sawubona’ to the fuzzy, spotty Ferraris of the veld. Starting this weekend, I will be heading to a private reserve further south to work in cheetah conservation. Not kidding, part of my daily routine will be walking cheetah. On a leash. I’d love to take them for a run, but really, who am I kidding? I’d have to tie them to the back of the Land Cruiser and let them cruise alongside the car for them to even break stride. They’d laugh at me in some bizarre, hissy, cheetah way if I even hinted at a jog.

So farewell to no electricity and hello solid walls, an actual plug and my own kitchen. Um, my own stove top and mini-fridge, as the case may be. While the fiance is keeping the baboons from raiding local dustbins, I’ll be chopping up game meat for 14 very large puddy tats. And that’s the way I like it, uh-huh uh-huh.  The new job will mean working with them all day long, doing such ridiculous things as taking them out for daily exercise, feeding and brushing and entertaining those that can’t be released back into the wild, monitoring their behavior, reintroducing them to other cheetah, and hopefully eventually helping to set up a breeding program to assist in repopulating the world with these incredible felines.

I don’t think I’d be off the mark if I predicted that the following blog installations will probably include quite a few messy moments from what is soon to become a human scratching post. Wish me luck!!!

‘Sawubona’ (pronounced ‘sau bow na’) means ‘hello’ here
‘Veld’ (pronounced ‘feld’) is a field
‘fynbos’ (pronounced ‘feign boss’) and ‘karoo’ (pronounced ‘kah roo’) are two biomes (also known as vegetation types or ecological
areas) in South Africa
‘cheetah’, for anyone born and raised under a rock, is the fastest land mammal on
earth. These cats are elegant, beautiful and highly endangered. And they are about to kick my butt.

Seek and Ye Shall Find (aka the search bar)