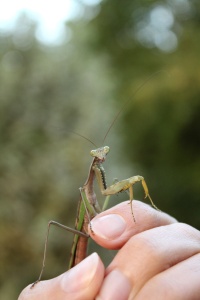 In keeping with 15 Life Lessons of Jane Goodall, here’s another nugget of wisdom Dr Goodall drops on us, and one that is very relevant in my current situation – there are many teachers in life. My latest teacher has six legs and thousands of eyes. And his name is Santiago.

I love animals, but I can’t really have any pets in the bush. And to be honest, the longer I work with animals, the less I feel okay about having pets in general. However, I inadvertently became the ‘mom’ of a praying mantis several months ago when a stowaway nymph (baby mantid) came into my home tucked away on a flower. He was so small and well camouflaged, I didn’t even discover him for a whole week.

Not knowing where the flower came from, I had no idea where the mantid came from either, so I decided to keep the little guy. This was a very big step for me, as I have never been a fan of insects. Nor had I a clue how to raise one. Things did not look promising for the teeny invertebrate.

As a little girl, I spent a lot of time outside. But I was always told to NOT dig in the dirt, to NOT play with bugs. Bugs were dirty and gross.

And then I saw nature documentaries with really awful bugs that did really awful things to people. These bugs (which I later understood were actually parasites) were pretty much my worst nightmare.

So I stayed away from the insect world.

Then I spent a few months in Costa Rica as a university student. And I saw some REALLY big bugs. ‘Size of my hand’ big. Every morning I had to shake out my shoes, lest I put my foot into a dark, cozy space that had become home to a scorpion or tarantula overnight. Every evening I battled it out with my biggest nemesis, the mosquito. But having people around me who appreciated bugs (okay, not the mosquitoes – I’ve YET to meet anyone who appreciates mozzies) made me more tolerant. Also, being in such a wild place sort of weened me off of bug-free living. It was my initiation into what was to come many years later on the other side of the world.

Enter Africa. The insects here are not just plentiful in number. They are also plentiful EVERYWHERE. My initial reaction was to gently usher them out of my clothes, bags, shoes, house, wherever they might be congregating, and back into open spaces where we’d be less likely to conflict. I was happy to let them live, but I drew the line at having them share my space like miniature roommates.

However, when you live in the bush, you simply cannot avoid them getting into your stuff. So you can either learn to live with them, you can learn to live with them AND appreciate them, or you can be miserable. I chose the middle option, mostly because when I finally stopped and watched insects, I was hooked. They are fascinating, so completely alien to us (green blood, funky eyes, lots of legs, and all that), they could hold my attention for hours at a time. That in itself is impressive.

You know when people talk about watching grass grow? Watching insects is not like that (except in the case of watching a cocoon, since nothing happens there for a long time). Insects are alert. They are a whirring world of activity: little bulldozer spiders clearing out dens, little ant armies marching in formation, little artistic dung beetles rolling the most perfect ball of poo imaginable.

(I guess I should note that technically a spider is not an insect. While it IS an invertebrate, just like other insects, it falls into a different group called the arachnids. Scorpions are also part of that group. But for the purposes of this blog, all the creepy crawly invertebrates get lumped together as bugs.) 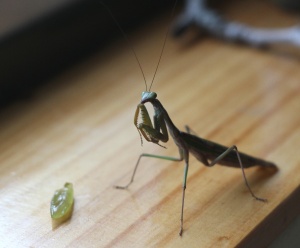 And then there are the mantids.

Praying mantises get their names from their habit of sitting with their front arms folded, almost like they are in prayer. These ambush predators can sit still for hours, and the extreme patience with which they stalk their prey makes a person who DOES watch grass grow seem impatient.

When my little mantid arrived, I wasn’t quite sure what to do. Mantids eat live prey. Where was I going to get food? Believe it or not, my home does not teem with bugs, even though there are plenty outside of it. I would have to learn to wrangle crickets, flies and grasshoppers and lure them to their unpleasant death at the hands of my tiny ninja. So I was not only living with a bug, I also had to catch MORE bugs to feed him.

Praying mantises are also in the same family as cockroaches. So you KNOW I would have to have a serious change of heart about insects to be happily sharing my home with a roach’s cousin. It did not sound like a good plan. But I was up for the challenge; I was ready to start a new chapter of growth in my life – learning to love a bug.

Plus, I have to admit I felt an immense amount of guilt over displacing him. How could I not take care of him?

I shouldn’t have worried. He grew on me very quickly.

It was hard NOT to like him, honestly. He was so entertaining. When he was a baby, he hopped around on my hand, his little legs tickling like weightless feathers dancing over my skin. His little head would swivel around and watch the world, snapping to lock eyes on me whenever he heard my voice.

When I took him outside, he would get as low as possible on my hand and nuzzle his little face in my palm. And when I put him in the grass, he would freeze and look up at me, waiting for me to put my hand back to within bolting distance, and as soon as it was close enough, he’d come scurrying back into my palm. It was adorable.

It’s amazing, seven months later, how attached I have become to the mantid we eventually named Santiago (for no other reason than we liked the name). He sits on my computer when I work. At night he sleeps on the curtain in my room.

These days he only eats from my hand and is quite the discerning gourmand. He no longer hunts, refuses bugs, and instead insists on fish, chicken or some type of fruit. I worry if he hasn’t eaten in a while. And I make sure he doesn’t get too far out of my reach (because if I can’t get to him to feed him now, he will likely starve). And I have to make sure none of the other predators (birds, spiders, lizards) get to him, especially the female mantid that lives in the bush just outside my door. I’ve caught her checking him out now and again, and she has been informed that my ‘child’ is off limits; no eating him. She keeps her distance, but on occasion she does pop up on the window to say hello. He freaks out, rears up on his back legs, opens up his wings (the ONLY time I’ve even seen his wings since they sprouted, fyi) and puts on his best threat display. She is not phased in the slightest. He looks ridiculous, but he thinks he is protecting his family, so he gets points for trying.

I hope that one day Santiago becomes a household name, an ambassador for the smaller, less attractive members of the animal kingdom that often get overlooked or demonised because they are so foreign to humans. A beacon for the creatures that aren’t traditionally cute and cuddly. (Santiago does NOT like to cuddle, fyi. You wouldn’t either if cuddling reminded you of being caught and eaten…)

So in going back to Jane’s life lesson, Santiago has shown me that teachers come in all shapes and sizes. And they don’t always teach you the lessons you think they will teach you. With Santiago, I have learned not just about bugs (particularly how to care for a mantid), but about my ability to see everything as valuable in the world. I have been reminded that we all must be more tolerant of what is so vastly different from ourselves. I have also been reminded that beauty is a feeling, not a face. And even the smallest, most unlikely bits in this world can steal your heart and make a lasting and profound impact in your life. And that’s today’s #buzzfromthebush.

Here are some choice shots of the little guy doing what he does, which is mostly preening, eating, and pretending to be a mantid model.

chowing down on dessert

Seek and Ye Shall Find (aka the search bar)